Brissenden Park: proposal for expanding public parkland on the waterfront 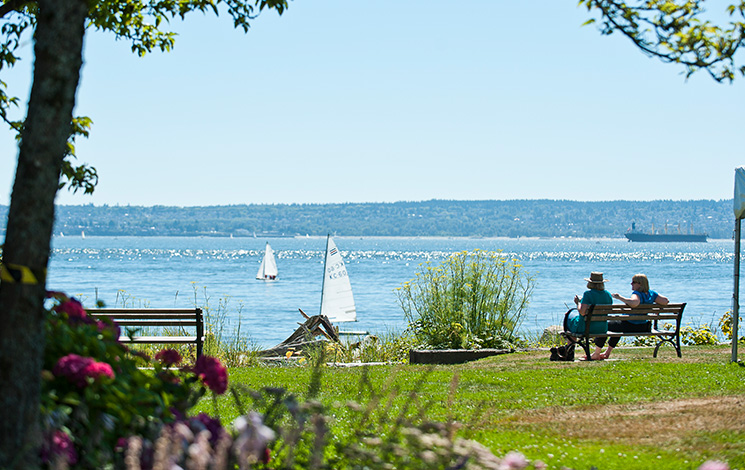 Following the B.C. Supreme Court decision in June 2020 to authorize variation of the legal trust regarding Brissenden Park, the District is proceeding with the steps set out in the judgment.

Persons who consider they are affected by the Proposed Road Closure Bylaw may make representations to Council at the October 4, 2021, Council meeting.

Notice of Road Closure and Removal of Highway Dedication

The District has developed a proposed funding strategy to acquire the last two houses on Argyle Avenue for public parkland.

The municipally-owned lands at 2519 and 2539 Rosebery Avenue (also referred to as Brissenden Park), have been identified as an option to sell or long-term lease to fund the purchase of these last two privately-held properties at 1444 and 1448 Argyle Avenue.

Brissenden Park is zoned for single-family residential use and is and would continue to be governed by the District’s Interim Tree Bylaw, in the same way the bylaw applies to any other residential property in West Vancouver (other than Development Permit areas).
In order to consider whether to proceed with this funding proposal, the District conducted public consultation on the proposed funding strategy, as well as neighbourhood consultation on the potential future use of the municipally-owned lands at 2519 and 2539 Rosebery Avenue.

Brissenden Park is comprised of two lots at 2519 and 2539 Rosebery Avenue, which are immediately south of the Upper Levels Highway. Brissenden Park has not been generally used as a public park. There is a single-family house on the property.

The property and house were donated to the District by Mr. and Mrs. Brissenden in 1990, with the stipulation that the land is used for public park purposes.

On June 13, 2016, West Vancouver Council endorsed the Ambleside Waterfront Concept Plan and specifically directed staff to “acquire the remaining two houses on Argyle Avenue." These are the last two of 32 houses on the Argyle waterfront to be acquired for public park use pursuant to the Argyle acquisition policy which started in the mid-1970s.

Acquisition of the two privately-held properties at 1444 and 1448 Argyle Avenue would allow the District to increase green and public spaces on the waterfront, and expand the foreshore path.

These properties are the last two of 32 houses on the Argyle waterfront to be acquired for public park use.

Public purchase will complete the Argyle acquisition policy started in the mid-1970s.

The approximate cost to acquire both houses is in the region of $10 million.

Two lots and a house at 2519 and 2539 Rosebery Avenue, immediately south of the Upper Levels Highway were generously donated to the District by Mr. and Mrs. Brissenden in 1990.

A legal trust was created stipulating that the property be used and maintained for public park purposes.  If this proposed funding strategy were to proceed, the District would need to apply to Court to vary the terms of the legal trust.

While referred to as “Brissenden Park”, the property has not generally been used as a public park.

The land consists of approximately 2.4 acres with one house on the property.

The land is governed by the District’s Interim Tree Bylaw which would both protect trees from being cut, and also allow development within the Permitted Building Envelope, driveway area and accessory building area.

It is zoned RS3 – Residential Single Family and is in an area of single-family houses.  Any other use would require a separate statutory public rezoning process and a separate public consultation process.

The house at Brissenden Park was built in 1948 and is classified as a secondary heritage building in the book, West Vancouver Survey of Significant Architecture.

Report to Council presented at the January 9, 2017, Council Meeting

Report to Council to be presented at the June 19, 2017, Council Meeting

The District carried out public consultation on the Brissenden Park initiative from around the beginning of February to mid-March 2017.

Two public information meetings were held on February 7 and 8, 2017 and staff also met with interested residents.

Information was provided at the public information meetings through information boards, and staff from an interdepartmental team.  Hard copy surveys and online surveys were used to gather public input.

The results of the public consultation are set out in the Council report which will be considered at the upcoming June 19 Council Meeting.

Report to Council to be presented at the June 19, 2017, Council Meeting

The hearing date for the District's Court application is January 23, 2020, at Vancouver Law Courts at 800 Smithe Street.

The hearing date for the District’s Court application (initially scheduled for November 13, 2018) has been postponed in order to carry out park improvements at Brissenden Park and to respond to concerns raised by the Ministry of Attorney General.

Council then resolved to commence a Court application to vary the terms of the trust with respect to Brissenden Park in order to:

Work will be commencing in September 2018 at Brissenden Park to dismantle the house to make way for the new trails mentioned above.

Amended Petition for the Court Application