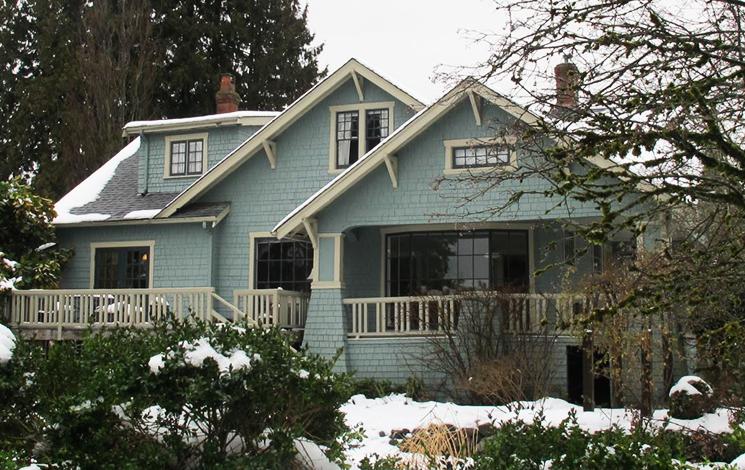 Updated plans are available that respond to minor revisions to the project.

On December 4, 2017, Council approved the heritage bylaws which will see the protection of the Rush House as a municipally designated building and allows for infill development on the site as set out in the Heritage Revitalization Agreement.

Appendix A to Bylaw 4951 (Conservation Plan)

Appendix B to Bylaw 4951 (Part 2) (Architectural and Landscape Plans)

Schedule A to Bylaw 4952 (Statement of Significance)

The District has received an application for a Heritage Revitalization Agreement (HRA) for 1195 - 12th Street. The proposed HRA would enable infill development of the property (total 4 strata units) as an incentive for ongoing legal protection (Heritage Designation) of the Rush House to be retained on the lot.

The proposed works include relocating the Rush House approximately 30 feet to the east and adding a garden suite in the basement level in accordance with a conservation plan.

A new Laneway Cottage and Garden Cottage would also be added on the property, with access from the lane.

The Rush House was built in 1923 and is among the oldest buildings in Ambleside. It is valued for its association with the early development of West Vancouver's historic Ambleside neighbourhood; for its representation of the early residential properties of West Vancouver, first owned by the Rush family; and for its Craftsman style architecture.

The Rush House is listed on West Vancouver's Community Heritage Register and is eligible for municipal conservation tools and incentives enabled under the Local Government Act.

The HRA is the legal framework between the District and the property owner, and municipal heritage designation is to provide for ongoing legal protection of the Rush House.